Gratitude to the Windrush Generation

It is June 2020. It is yet another time to be thankful to the Windrush Generation for having stayed on to help change Britain in spite of everything they went through. Indeed, it has been 72 years since the SS Empire Windrush sailed up the Thames and docked at the port of Tilbury, just outside London, bringing 492 Caribbean passengers to live and work in Britain. These were the first large group of people from the Islands to respond to the call from the “Mother Country” of the empire that, at that time, was still reeling from the Second World War. Britain needed to import foreign labour to help rebuild its economy and so, it looked to its colonies for nurses, builders and other workers.

When they docked at Tilbury, the 492 Jamaican passengers of SS Empire Windrush believed themselves to be citizens of the United Kingdom and Colonies as provided by the British Nationality Act of 1948. But, of course, they were anything but. They came expecting a grateful welcome from the Mother Country, thanking them for their sacrificial assistance during the Second World War. Despite having just fought a war, at least in part over discrimination against people from other races, when their colonial subjects arrived in Britain, many British people responded much the same. As Andrew Marr puts it;

On the one hand … Britain’s very sense of herself was tied up in the vanquishing of a political culture founded on racial difference. … And yet everyone knew this was not really the whole story’. While the politicians may have spoken of ‘the right of the colonial peoples to be treated as men and brothers with the people of this country,’ those colonial peoples, looking for somewhere to live, were faced with the blunt rejection of cards in lodging-house windows reading ‘No dogs, no blacks, no Irish’.[1]

Even among Christians who should have been the model of what it means to be a loving family, brothers and sisters from other lands were, for the most part, treated with the same suspicion and fear they encountered in the streets. Walton observes that;

There is a huge cost to such a lack of unity, not only were the migrants themselves undoubtedly hurt by the unwelcoming spirit, but it also presented a terrible witness to the rest of the country. A chance to be at the vanguard of racial justice, inclusion and radical welcome across difference was lost. The opportunity to show that in Christ there is neither Jew nor Greek, White British nor Jamaican, was gone. [2]

‘It was becoming clear to post-Windrush black people in Britain that they would not be allowed to live quietly, to work, pay tax and assimilate. They would, instead, be punished for their very existence in Britain.’ [3]

As we commemorate the Windrush generation today, we must also remember the racial challenges they had to endure. Those of us who have followed, owe them a great deal of gratitude and ought to familiarise ourselves with their history. Why did they face many challenges? First and foremost, it was due to fear. Most people fear that which is different, and here were people who were different indeed, yet who felt themselves to be as British as their white counterparts. When the authorities failed to clamp down on racism, when those in charge, both locally and nationally, seemed hell-bent on ignoring the problem, downplaying it or even perpetuating it, racist discrimination and prejudice continued unchecked. The result is illustrated in an extract from Reni Eddo-Lodge’s Why I’m No Longer Talking to White People About Race;

‘In 1982 John Fernandes, a sociology lecturer, was asked to develop a course on multiculturalism and teach it to trainee police cadets at Hendon Police College. In gathering evidence to help him shape the course, John asked cadets “to write anonymous essays on the topic of ‘blacks in Britain’”. These essays revealed a deep-seated, unquestioning prejudice against black people:

‘They are, by nature unintelligent [sic] and can’t at all be educated sufficiently to live in a civilised society of the Western world,’ one cadet wrote. Worse, though, was the comment from someone in a senior position at the college: ‘If I had the slightest suspicion that one of the young cadets had serious deep prejudices rather than shallowly expressed prejudices like that, then I would not recommend him to be a constable.’[4]

Prejudice is one thing, wilful blindness to it is another altogether. Yet, the Windrush Generation stayed. Most planned to stay not more than five years, to work hard and send money back home, but they ended up staying indefinitely. They sent for their family members and got settled here. Racial discrimination meant that many of them would be caught in the poverty trap. The promise of a good life would never materialise. Nevertheless, their resilience and determination to stick it out and make a home in an inhospitable land paved the way for the opportunities we now enjoy. To those who laboured and endured and struggled to make the UK a better, more open, more accepting place for us, we say thank you.

Seventy years later, anyone watching the news or reading a newspaper in the spring of 2018, would have heard the horrendous tales of people who were invited to come here, and who had made Britain their home for fifty years or more, were now being deported, threatened with deportation, or refused medical treatment. 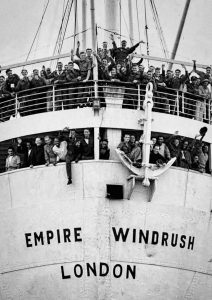 Many of these people were children when they arrived. They were given the legal right to remain here and have paid their taxes and worked for their living and built their communities for decades. Worked in critical industries steel, transport and formed the backbone of the new NHS. Over the past 70 years, contributed to sports, entertainment, political life, music, food. They consider Britain their home, and they know no other. Yet, they have been told in no uncertain terms that they are no longer welcome.

British Christians missed an opportunity to stand for unity all those decades ago, but the opportunity does not have to be lost forever. Witnessing, in the wake of George Floyd’s death, the unprecedented alliance from the white community, and worldwide condemnation of the injustice against black people, however, is heart-warming and makes one hope for a new kind of relatedness on the horizon. To quote Dr Joel Edwards,

It might feel a stretch but worth hoping and finding a language that captures and nurtures the new sprout that is coming out of very traumatic history and event. In the coming weeks and months, in every platform and opportunity we find, we should keep the momentum for the dialogue going.

Today, when some people are still suspicious of outsiders, some government officials are enacting unjust legislation against parts of the population, and the nation is struggling to find a sense of its own narrative for the 21st century, the Church has a new opportunity to lead by example. That example will be costly. It calls for a radical shift in attitudes. It calls not merely for repentance, forgiveness, and reconciliation focusing on the past wrongs, but for something which will help us forge the path for future harmony; gratitude. Therefore, on Windrush Day, when we celebrate and educate ourselves of their history, our gratitude to the Windrush generation and their descendants is laud and heartfelt.

[2] How Racial Division has held back the UK Church

The good acknowledged is the good promoted.

Our mission is to encourage and promote a gratitude culture in Britain.

This is the fourth in a series of bite-size videos where we ask our Founder, Girma Bishaw, some tough questions on gratitude.

Bite-Size 4: What benefits are there to practising gratitude?

Gratitude is the acknowledgement of the good.